Meet Miranda Gauvin – The Voice of Camilla in Holy Knight 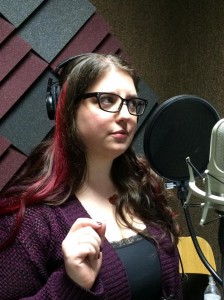 After wrapping Lilith’s recording session, we brought in one more person to record today–meet Miranda Gauvin, our voice actress for Camilla!

Miranda has done voiceover work for a number of video games, including Aphrodite in Apotheon (which comes out today!), Sarahi in Dust: An Elysian Tail, and many many roles in releases from Wadjet Eye Gamesincluding The Blackwell series, Primordia, Resonance, A Golden Wake, and the upcoming release Technobabylon. She is thrilled to be making her anime debut in Holy Knight! Check out her website atwww.mirandagauvin.com.