Meet Michael A. Zekas – The Voice of Cliff in Holy Knight 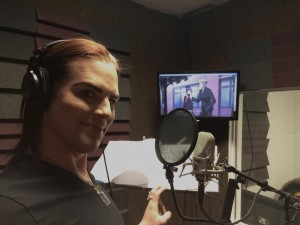 We recorded our villain today–say hello to Michael A. Zekas, who plays Cliff in our English dub of Holy Knight! One of Melanie’s very first VO students, Michael is no stranger to villainous roles, having co-starred on stage with Melanie as antagonists in two NYC stage productions (including one on the Off-Broadway stage with Melanie’s LTM Audio Players Troupe live voice acting ensemble) and playing deliciously evil roles in Numantian Games‘ Lords Of Xulima and Wadjet Eye Games‘ upcoming release Technobabylon. With a number of other exciting projects in the works, you can bet you’ll be hearing more from this deliciously dark redhead in the near future. Welcome to the cast, Michael!

For more about Michael, visit his website atwww.MichaelAZekas.com (which I’m told is currently under construction but will be back up shortly)!