Meet Melanie Ehrlich – The Voice of Chizuru in Holy Knight 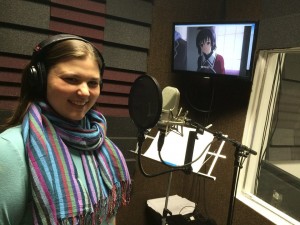 Melanie is an actress and voiceover talent with 300+ credits spanning film, TV, commercials, animation, video games and more. She voices Vella Wilde, one of the main characters in the upcoming video game YIIK fromAckkStudios, which is scheduled for release on the Wii U, PS4, PS Vita, PC, Mac and more in late 2015. Recently, she’s been seen on screen inInvestigation Discovery‘s hit TV series Redrum, on stage leading the LTM Audio Players in their innovative live voice acting showcase, and heard inNumantian Games‘ recent release Lords Of Xulima.

She’s also one of the owners of (and the “M” in!) MB VoiceWorks, as well as the owner of Listen To Melanie, through which she teaches voiceover classes, directs the LTM Audio Players Troupe live voice acting ensemble, and works as a freelance director and casting director in NYC.

Melanie will be giving a workshop on Voice Acting In Games at IndieCadeEast at the Museum of the Moving Image in NYC this Sunday, as well as moderating a panel on voice acting in indie games at PAX East 2015 on March 6th. (You can find more info about those talks athttp://www.listentomelanie.com/appearances.)

Welcome to the cast, Melanie!