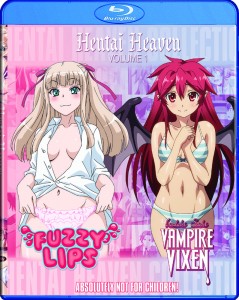 Vampire Vixen, which is based on Doumou’s popular hentai manga Itadaki! Seieki!, tells the story of a male student named Kanzaki who receives an anonymous love letter from a secret admirer who wants to hook up with him. He’s not sure what to expect on his first rendezvous but he would have never guessed to be greeted with a swift kick to the face! Meet Mari Setagoya, a sexy, confused and ravenously hungry succubus/vampire hybrid. After sucking some of his blood, Mari confesses to Kanzaki that she never truly acquired a taste for the red stuff. Since she is required to feed on bodily fluids for sustenance, they mutually agree on an alternative substance that Kanzaki is more than willing to supply!

Fuzzy Lips is based on the adult manga by INU and follows a young female student named Katakura Kon who enters into a forbidden, hyper-sexual relationship with her homeroom teacher, Mr. Kurosawa. Soon, Kon rarely attends classes and moves in with the teacher who tries to keep the arrangement a secret. Since neither is willing to verbally express their true feelings to each other, their frustration heightens and they resort to more and more intensive carnal explorations!