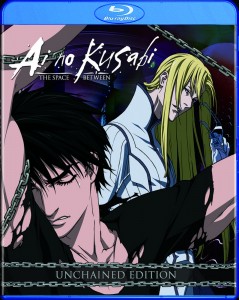 Ai no Kusbai: Unchained is a four-episode OVA based on a novel by award-winning female sci-fi author Rieko Yoshihara.

Set in a dystopian future where the mostly male society on the planet Amoi lives under the authoritarian control of a supercomputer named Jupiter. Since social class is determined by the color of one’s hair, Iason sits at the top of the pecking order as a ‘blondie’. He is given a lot of latitude in his daily life but draws unwanted attention when he chooses to take on a ‘mongrel’ gang leader named Riki The Dark as a ‘pet.’ There are no taboos against those in the lighter-hair classes staking claim to lower class darkhaired citizens but the intensity of their relationship begins to draw dangerous attention. As emotions and tensions deepen, will Iason and Riki escape the fateful consequences of their forbidden romance and for violating the strict caste system?